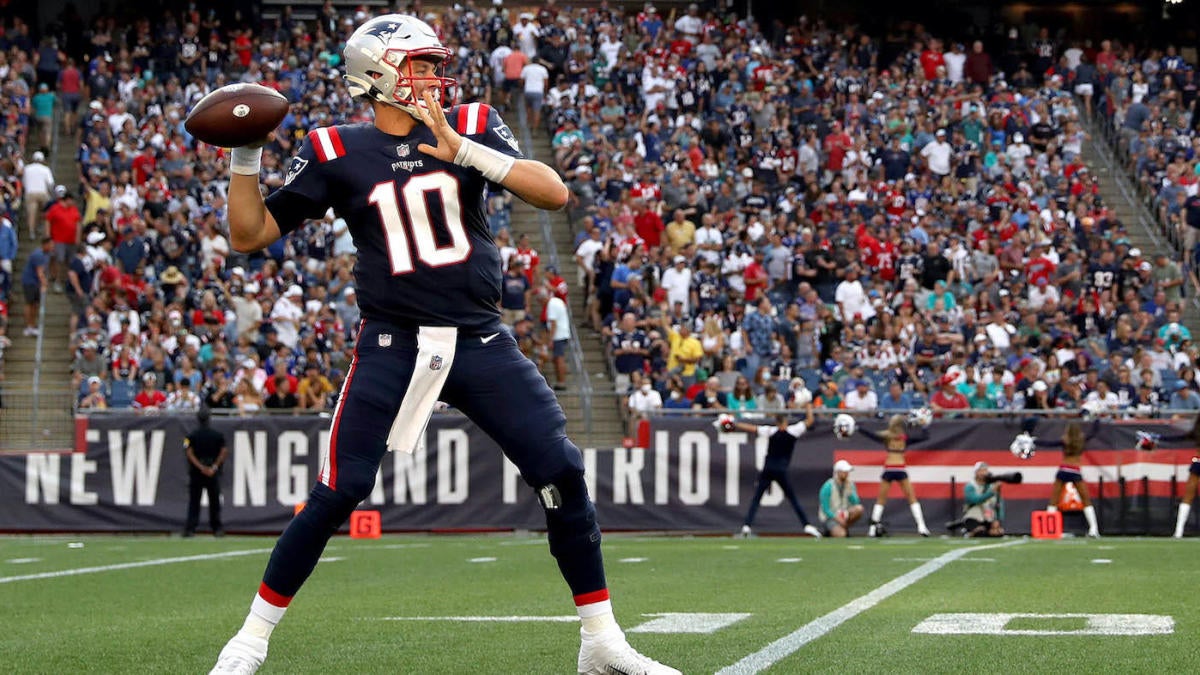 Tom Brady’s return to Foxborough to face the New England Patriots for the first time since leaving the franchise has absolutely dominated the NFL this week. On top of the sheer hype for this game to kick off, Brady’s relationship with Bill Belichick and the icy road they went down that ultimately led to their divorce has been one of the main storylines that has gone under the microscope along with how these two will attack one another when they ultimately square up in prime time.

One piece to this showdown of the century that has flown under the radar, however, is Mac Jones, New England’s new leading man under center. The first-round rookie has already been compared to Brady at every turn upon his arrival to Foxborough, but how will Jones fare with Brady directly looming over him on the opponent’s sideline?

“I think it just goes back to really with pressure,” Jones said this week about feeling any added pressure due to facing Brady, “you just got to focus on doing what you’re supposed to do, and people who have jobs in high-pressure situations, that’s what they do. They do their job really well, and they prepare really hard, so it’s all you can control, and once the hay is in the barn, the hay is in the barn, and you just got to go play, and I think everyone will be excited, and we’re just going to be ready to play when it happens.”

Jones is coming into this matchup following his worst statistical game of his young career, throwing three interceptions against the New Orleans Saints and struggling with his deep ball (1 of 11 on throws 20-plus yards down the field). While Jones has shown flashes of his potential during these early stages of his development, Sunday does provide an opportunity to not only bounce back after a Week 3 loss, but turn in a truly great performance with the eyes of the NFL centered on this game.

Of course, protecting Jones will be paramount in this game, especially with the Buccaneers boasting a strong front seven. That said, if the Patriots can keep him upright, this is a secondary that can be had. Tampa Bay comes into Sunday allowing the most passing yards per game (338.3) in the entire league. Opposing quarterbacks are also completing 72.2 percent of their passes against this unit. While they did add veteran Richard Sherman this week, Jones should be able to find some openings.

One way Jones can look to move the ball down the field — and help negate any pressure from Tampa Bay — is working the short/intermediate passing game, an area he’s thrived thus far. On throws 9 yards or fewer, Jones has an 85.7 completion percentage and has 448 yards through the air (5.8 yards per attempt). While the downfield attack is still developing, this may be the best course of action for New England’s offense to move the ball. It would also be a callback to an offensive attack that was famous around these parts when Brady was under center, which would add another wrinkle to this epic matchup.

The NFL world will be watching this game to see what Brady does against his former team, but wouldn’t it be something if Jones put together his first statement game of his young career.

Thanks for signing up!

Keep an eye on your inbox.

There was an error processing your subscription.

The Patriots will now have to go the rest of the 2021 season without captain James White, who placed on IR after suffering a hip injury in Week 3. Of course, this is a massive blow to New England’s passing attack as White is second on the team in receptions through the first three weeks. While White’s role as a receiving back is clear, an underrated piece to his loss is how New England will continue to protect Jones. In his 11 pass-blocking opportunities this season, White has a clean sheet, not allowing a single pressure (per Pro Football Focus).

That’s going to be a critical piece for all of New England’s backs as they see increased work with White sidelined for the year. Damien Harris, the Patriots starter, hasn’t been particularly strong in this spot thus far, allowing two pressure (including a sack) in six pass-blocking opportunities. Second-year back J.J. Taylor is a favorite to fill White’s shoes in the passing game, but it remains to be seen how the 5-foot-6, 185-pounder will fare in pass protection.

As the Patriots try to figure out how Taylor and rookie Rhamondre Stevenson fare in blitz pickup, the team may opt to increase the workload of veteran Brandon Bolden. While Taylor and Stevenson have higher ceilings with the ball in their hands, Bolden is tried and true in pass protection, allowing no pressures in seven pass-blocking opportunities this season.

How the Patriots may defend Brady

My colleague, Jared Dubin, wrote a fantastic breakdown of how Bill Belichick may defend against Brady and the Buccaneers’ offense. One nugget that stood out in his piece — which you should read in its entirety — is that the Patriots have been in man coverage on 46.7 percent of passing snaps this season, which ranks second in the NFL. Outside of the red zone, Brady has seen man coverage on just 23 snaps this season and is 12 of 22 for 168 yards and a touchdown.

“It’s obviously a small sample, but it’s worth noting that he’s averaging 1.2 more yards per attempt against zone (8.6) than he is against man (7.4) on non-red-zone throws,” writes Dubin. “It’s further notable that the trend held last year, with Brady clocking a worse passer rating (83.5 vs. 92.7) against man coverage than zone outside the red zone and throwing more interceptions (four) than touchdowns (three).”

Dubin also notes that the Patriots could invite the Buccaneers to run the football by putting less men in the box. That’s a strategy that Belichick has deployed in the past with matchups against Peyton Manning, so it’s certainly possible he rolls it out against another legendary QB.

Lost in the hoopla of Brady’s return to New England was the fact that Rob Gronkowski — the franchise’s all-time receiving touchdowns leader — was also set to to face the Patriots for the first time since coming out of retirement and being traded to Tampa Bay. However, the tight end will not be playing in this highly anticipated head-to-head due to a rib injury he suffered in Week 3. Not only will Gronkowski not be playing, but he reportedly did not even make the trip up to New England.

One of the quirkier headlines Brady made this week was the fact that the quarterback’s voice sounded extremely raspy during his Thursday press conference. While some questioned whether or not the quarterback was under the weather, that’s not the case. To prepare for the road environment at Gillette Stadium, the Buccaneers pumped in crowd noise at practice, which Brady had to yell over to get the plays across.

“Yeah, that was loud today,” Brady said Thursday. “I’ve had a few of these days, I don’t know what the deal is, so I’ve got to try to figure this out. I said my throat’s more tired than my arm. Imagine that.”

Wide receiver N’Keal Harry made his return to practice this week after beginning the season on injured reserve and has since been activated onto the 53-man roster, giving him a chance to play in Week 4.

Harry suffered a shoulder injury while diving for a deep pass from Jones during New England’s second preseason matchup with the Eagles. The Patriots originally put Harry through on opening 53-man roster before placing him on IR to shorten his return window to just three weeks.

While Harry — who is now sporting No. 1 — has yet to truly live up to his No. 32 overall draft status, the Patriots are searching for someone to inject some life into their offense. For what it’s worth, Jeff Howe of The Athletic notes that Jones was 14 of 18 when targeting Harry at training camp. If they can move that chemistry into regular-season games, Harry could finally start producing returns for New England.

Brady on the verge of even more history

On top of being just 68 yards away from breaking Drew Brees’ record to become the NFL’s all-time leading passer, Brady can carve his name into the record books even more on Sunday night. If he is able to beat his former team, he will become just the fourth quarterback in league history to defeat all 32 teams. Brett Favre, Peyton Manning, and Brees are the only three other quarterbacks who’ve accomplished this feat.