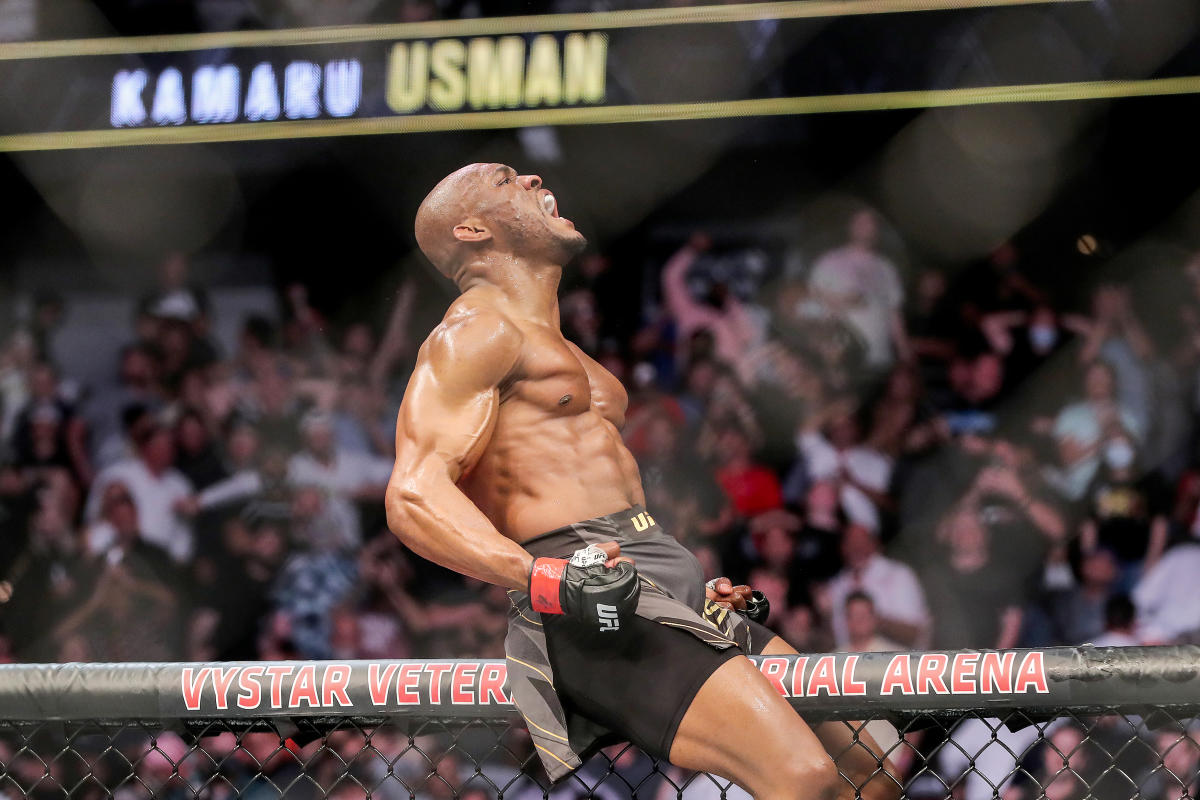 The UFC had not only the best year business-wise in its close to 30-year history, but the fights it put on might have been the best ever, as well.

Week after week, there were cards filled with jaw-dropping bouts, amazing comebacks, feats of strength and skill and finishes like never before.

Many fighters had very good years — even great years, you might say. One, though, stands far above the pack.

Kamaru Usman is the clear, simple and easy choice as the 2021 Yahoo Sports MMA Fighter of the Year, despite the fact that there are so many legitimate candidates.

Usman went 3-0 in 2021 and did it by beating the best of the best of the best. At UFC 258 on Feb. 13, Usman knocked out Gilbert Burns in the second round of what was expected to be a pitched battle. Instead, it was a one-sided mauling as Usman exerted his dominance early.

He returned at UFC 261 on April 24 and put Jorge Masvidal to sleep just 62 seconds into the second rounds with a frightening combination. Going into the fight, the conventional wisdom that it would be Masvidal’s striking against Usman’s wrestling, but Usman out-struck Masvidal and knocked him out cold.

Then, he capped the year by defeating arch-rival Colby Covington for a second time at UFC 268 on Nov. 6. Usman won a decision and overcame a bit of adversity when Covington hurt him with strikes.

Given the quality of opposition, the resounding way he won the fights and his activity level, Usman is an easy choice as Fighter of the Year.

Lightweight champion Charles Oliveira would have been the winner in most other years. He won the belt on May 15 at UFC 262 with a second-round TKO of Michael Chandler in one of the year’s most compelling bouts.

He was an underdog in his first defense, when he met Dustin Poirier at UFC 269 at T-Mobile Arena in Las Vegas on Dec. 11. Poirier was coming off back-to-back one-sided victories over Conor McGregor and was ranked No. 2 in the Yahoo Sports pound-for-pound rankings at the time.

Oliveira survived a rocky first round, dominated Poirier in the second and submitted him early in the third.

It was a breathtaking performance that was his 10th consecutive win dating back to UFC 225, when he submitted Clay Guida on June 9, 2018. But despite that, it wasn’t enough for him to surpass Usman.

• Rose Namajunas — The UFC’s women’s strawweight champion was 2-0 with a pair of victories over Zhang Weili. She won the title in a massive upset with a head kick KO at UFC 261, then defended it with a decision at UFC 268.

• Ciryl Gane — Gane went 3-0, winning decisions over Jairzinho Rozenstruik and Alexander Volkov and then capturing the interim heavyweight title by knocking out Derrick Lewis in a one-sided bout at UFC 265.

• A.J. McKee — McKee won the Bellator featherweight championship by submitting Patricio “Pitbull” Freire. It was his only bout of the year, but it was spectacular against a high-level opponent.

• Alexander Volkanovski — Retained the UFC featherweight title with an impressive unanimous decision win over Brian Ortega at UFC 266, recording his 20th consecutive win in the process.

• Valentina Shevchenko — The UFC flyweight champion was 2-0, running her winning streak to eight with TKOs of Jessica Andrade and Lauren Murphy.

• Julianna Peña — Peña won the UFC’s women’s bantamweight title with a spectacular upset of Amanda Nunes, submitting her with a rear naked choke in the second round.

How To Get a 10% Monthly Return Day Trading