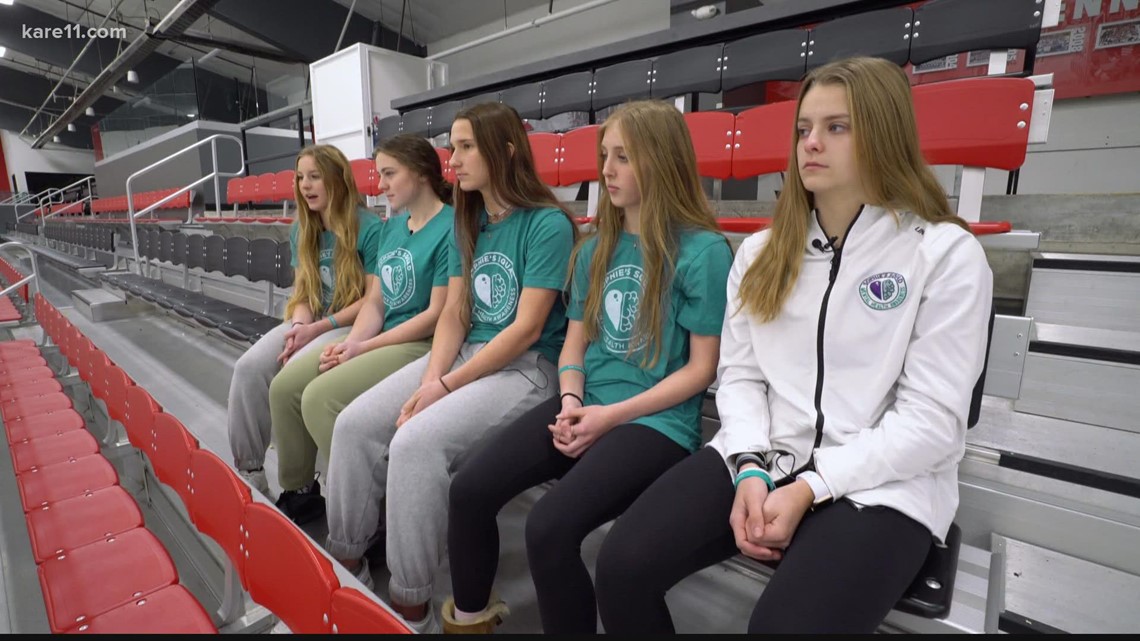 After the sudden and unexpected death of Sophie Wieland this summer, her teammates and coaches started raising awareness about mental health.

CIRCLE PINES, Minn. — When Centennial girls hockey hosts Hill Murray on Thursday night, the puck will drop in honor of Sophie Wieland, a 14-year-old from Sartell, who touched the lives of players on both teams.

“She was always the person at the rink who would have a smile on her face,” said Centennial freshman, Alexis Larsen.

“Definitely, whenever she walked in the room she was always smiling,” said Hill Murray eighth-grader, Carlie Griffin. “It lit up the whole room.”

Griffin and Larsen are among several players from both Centennial and Hill Murray who shared the ice with Sophie as part of a Skate to Excellence traveling team this summer.

“She was always positive and cheering everybody up,” Larsen said. “When someone got down on the bench, she was there for you and always gave you the extra encouragement.”

But Sophie’s friends and teammates didn’t know that Sophie had been struggling in silence with her mental health. In July, near the end of their summer season, Sophie died by suicide.

“I remember, I just like, dropped to the ground,” said Hill Murray eighth-Grader, Elli Petronack. “It was just so shocking.”

“I talked to her the day before and she was still smiling, still happy,” said Centennial freshman, Brooke Bugos. “I mean, we had conversations, she sat right next to me in the locker room, and I just had no idea what she was going through.”

Sophie’s teammates weren’t the only ones.

“Nobody had a clue and nobody had any idea,” said Sophie’s mom, Aimee Wieland. “I mean, I still can’t believe it some days, that it really happened.”

Wieland says her daughter had many interests and even more friends. She says Sophie also seemed excited about the future.

“She was such a happy, kind, generous soul,” Aimee Wieland said. “She was hardworking, always looking out for everybody, and it wasn’t until after she passed away that she left a letter that explained that she’d been suffering for about three years and just didn’t tell anybody. If she just knew a fraction of the love that people had for her… I just wish she knew that.”

“I promised (Sophie’s mom) that we’re going to do something about this,” Hughes said.

After Sophie’s sudden death, just before a major tournament, Hughes decided to keep that promise by working with his players and their families to start a group called Sophie’s Squad.

“It wasn’t about hockey,” Hughes said. “It was about how we’re going to take care of these kids.”

Sophie’s Squad started with the goal of helping her teammates check in with each other. The team also worked to remember Sophie with special helmet stickers. Within a few weeks, the group decided to raise awareness — and funds — at their annual, end-of-year golf tournament.

“I think it’s really overlooked how kids feel. I mean, they have a lot of responsibilities and pressure on them,” said Hill Murray sophomore Karis Weyandt.

In recent weeks, the US Surgeon General has worked to bring more attention to the issue. A rare, “Protecting Youth Mental Health” advisory cited a troubling statistic for young girls. By early 2021, emergency department visits for suspected suicide attempts were 51{5dfd1de9da59c0c38ca6720e3c60aa45adf7724498a16e1572e038fdc81a6ae9} higher for adolescent girls than the same time period in 2019.

Sophie’s squad talked to KARE11 about what girls are dealing with during the pandemic and beyond.

“Social media is a big thing,” Petronack said. “Everyone wants to be perfect, like look this way, feel that way.”

“It’s a ton of pressure,” Griffin said. “School and managing sports and friends and family and all that stuff, it’s… it’s a lot.”

“I kind of feel overwhelmed sometimes and I can say my mental health has maybe taken a toll,” Weyandt said. “It really just depends on the day.”

“It can be especially hard because hockey takes such a toll on your mental and physical health,” said Centennial sophomore Hannah Thompson.

“You want to be the best and perfect at everything and that’s really hard,” said Centennial junior, Katie Booth. “Having a game like this just kind of gives a better understanding of why we play hockey. It’s a community.”

And that community doesn’t stop at the high school level.

“I’m going to do whatever I can to show them that it’s okay to talk about it and it’s okay to not be okay,” said Gabbie Hughes, a senior forward at UMD, who helped coach Sophie, alongside her dad this summer.

In January, Hughes and her UMD team will host a Sophie’s Squad game in Duluth.

“When I was in high school I struggled with mental health and it wasn’t something you talked about to anyone,” Hughes said. “And it’s in the collegiate level, too. Girls I know, and myself, it’s so hard to talk about, but I’m playing in a Division I school and living out a dream and I still struggle all the time. It’s just what happens, and it’s okay.”

To Sophie’s family, having that discussion is so much more than okay.

“It means everything,” Aimee Wieland said. “Because you just don’t want her name to be forgotten.”

The Sophie’s Squad event at Centennial Sports Arena will kick off Thursday, Dec. 23, with the JV game at 5 p.m., followed by a special puck drop for the varsity game at 7. The crowd is encouraged to wear teal in support of mental health awareness.

For more information, including how to host a Sophie’s Squad event, click here.

Use these additional resources if you or someone you know is facing a mental health crisis:

Watch all of the latest stories from Breaking The News in our YouTube playlist: