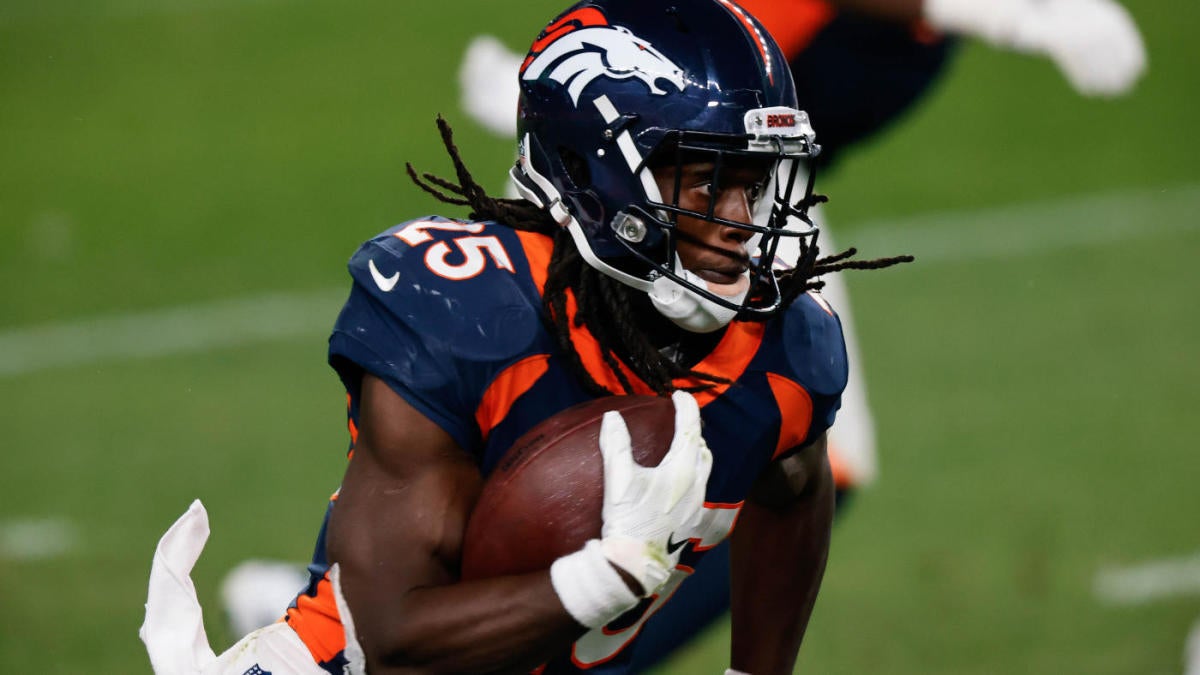 The 2021 NFL trade deadline is fast approaching on Nov. 2. Some teams are already squarely in the “buyers” camp. Others are already confirmed as potential sellers. But all 32 teams could use some degree of tweaking. We decided, with that in mind, to map out 32 different trade possibilities — one for each club.

Buckle up and enjoy!

The Cardinals have a deep playoff run set in their sights, so keeping Kyler Murray upright is paramount. With tight end solved via Zach Ertz and Justin Pugh banged up, they could stand to add some depth in the trenches.

Normally, Cordarrelle Patterson would be the bigger asset, but they won’t deal him right now, with Matt Ryan still angling to compete. Hurst, on the other hand, has no real long-term future here with Kyle Pitts absolutely rolling at tight end.

Lamar Jackson is doing just fine with his current crop of wideouts, and Marquise Brown has emerged as a true No. 1. But Robinson would be a premium rental for a title run, bringing size and physicality to a group that should only get better.

They aren’t in dire need of secondary help, but another cover man would be nice for the second half of the season. Maddox wouldn’t replace Taron Johnson necessarily, but rather give Buffalo flexibility in the slot and on the outside.

If the Panthers intend to protect whichever QB they trot out there for the rest of the year, they’ll probably want to beef up their line. Hernandez is no all-star, but he’d at least give them some flexibility up front.

He’s clearly their top weapon, and normally, you don’t want to auction off No. 1 wideouts when you’re trying to develop a new quarterback. But he’s had one foot out the door for a while, with 2022 free agency already in his sights.

Is Hargreaves that much of an upgrade over anything they have at corner opposite Chidobe Awuzie? Probably not. But with Trae Waynes on injured reserve, they could use some depth, especially since they’ve been more competitive than expected.

Is Odell still good? Absolutely. Why has he been so consistently quiet in Cleveland? Your guess is as good as ours, but the injuries haven’t helped. The Browns could use him for a playoff run, but they should at least take calls before his value dips further.

Jerry Jones knows he’s got a special team this year, so why not make a big-name splash? The Falcons aren’t giving up but might be willing to part with the big man’s big contract. He’d beef up a playmaking Cowboys defense for a run at an NFC title.

He’s probably a touch underrated these days, but the Broncos are showing themselves after that mirage of a 3-0 start. It’s time to tear it down. Javonte Williams is already in tow as the back of the future, and Gordon could help a contender.

Craving even more NFL coverage focusing on previews, recaps, news and analysis? Listen below and follow the Pick Six podcast for a daily dose of everything you need to follow pro football.

It’s past time for the Lions to get his contract off the books. Living up to that huge payday post-Patriots was always going to be a challenge, but there’s no need for Detroit to hang on to a pricey and unspectacular 28-year-old pass rusher.

Let’s assume Allen Robinson is off the table, courtesy of the Bears. Cooks makes all the sense in the world as a proven, nimble outside target to plug in opposite Davante Adams. What better way to show Aaron Rodgers you’re all in on his latest title run?

Swap in Phillip Lindsay or Mark Ingram or, frankly, any rental veteran on their roster full of free agent scraps. They should be selling any and every older starter and/or role player in order to collect assets for the inevitable 2022 overhaul.

We also have the Ravens listed as logical A-Rob suitors, but the Colts could use him even more. No, Chris Ballard shouldn’t be burning through picks, but giving Carson Wentz a huge upgrade at WR would go a long way toward bridging the AFC South gap.

If they do anything at the deadline, it should involve auctioning off older, expensive vets. But Isabella, at 24 and underused in the Cardinals’ crowded offense, would be a nice high-upside addition for Trevor Lawrence out wide.

Not only does Ogbah have familiarity with Kansas City, but he’s actually thriving off the edge right now. That should be music to the Chiefs’ ears, considering their defensive issues this year. Miami shouldn’t have a problem taking the call at 1-6.

Pittsburgh probably won’t bite just because they’re going to tout competition until Ben Roethlisberger is finished, but Haden’s veteran presence on the outside would be a welcome addition for a scrappy Raiders defense that could use more cover men.

Austin Ekeler is the man in the backfield, and Justin Jackson is just fine as RB2, but if this team’s gonna go for a run, why not give Justin Herbert another outlet on the ground? Mack wants a fresh start, and Indy is willing to give it to him.

They should only do this for pennies, as they already traded for Sony Michel, but if there’s one thing they can bolster for a potential title run, it’s the backfield. Johnson is a bigger back who could complement Darrell Henderson with a limited role.

He’s usually been a ballhawk when healthy and motivated, but he’s also been eyeing new destinations for a while. At this point, Miami needs to be thinking about rebuilding, not committing, to its current defense. Howard would still net a decent pick or two.

They have a real path to the playoffs as a wild card, but it’ll take shoring up the back end of Mike Zimmer’s defense, which is without an injured Patrick Peterson. Before you pull the plug on the Zimmer regime, maybe give him one last shot with a proven cover man?

The Pats should arguably be selling at the deadline, but at 3-4 and fresh off a huge divisional win, they can still talk themselves into upgrading a position. Fuller is good enough to warrant a flyer, but not too costly to ruin their finances post-2021.

No, Foles is not an upgrade on Jameis Winston, but if the Saints are gonna make a scrappy playoff run, why not secure proven insurance, allowing Taysom Hill to stay in his utility-man role? The cost would be cheap, and Foles is ready to relocate.

There’s no reason the G-Men need to keep him around ahead of 2022 free agency. The former first-rounder has needed a change of scenery for a while, and maybe a contender seeking offensive depth would take a flyer on his athleticism.

Marcus Maye is the obvious candidate to be moved, but Crowder should also be on the block. He’s still a solid option out wide, but they need to see what they have in Elijah Moore. This season is increasingly more about evaluating 2022 pieces.

Howie Roseman probably won’t, because dealing Cox would signal to the locker room that 2021 is basically a lost cause. But how could you not listen to calls considering Javon Hargrave’s emergence and Cox’s massive contract going on 31?

They could probably stand to sell bigger names, but as long as Ben Roethlisberger is active and they’re reasonably within reach of a playoff run, they won’t. Ebron, though, has no long-term role here, with Pat Freiermuth locked in as the top tight end.

A week or two ago, you could’ve made the case they needed Jimmy G to remain in the playoff hunt. Now, with Kyle Shanahan’s offense slumping and a potential division title slipping away, they’d be better off turning completely to Trey Lance-evaluation mode.

They like some of the young guys at the back end of their secondary, but if they intend to make any kind of run once Russell Wilson is back, they’re gonna need more help on defense. Fuller is just waiting for fresh scenery out in Denver.

The Bucs have been hit repeatedly by injuries on defense, particularly in the secondary. Maye has experience playing under Todd Bowles and would mark a significant upgrade for their inevitable run at a repeat.

Look out, AFC South. The Titans have now beaten a number of contenders early in 2021, and if they were to take a flyer on someone like Barnett, who’s ready for a change of scenery, they could beef up an already feisty front.

Yes, he’s had a long and successful career, but playing under his second straight tag, he still doesn’t have a long-term future locked up in D.C. Besides, Ron Rivera needs to start thinking about reallocating resources to fix the most important position on the roster.